The MODIS reflective calibration algorithm is designed to determine the at-aperture spectral radiance of the Earth scene and the bidirectional reflectance of the Earth scene with their respective associated uncertainties. Level 1A data is Earth-located raw sensor digital numbers and Level 1B data is Earth-located, calibrated data in physical units. 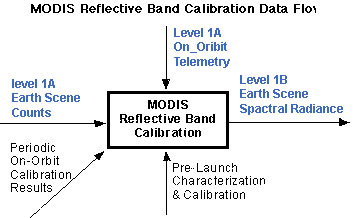 The following figure is a simplified RSB L1B flow diagram.

The major steps in the RSB calibration are: 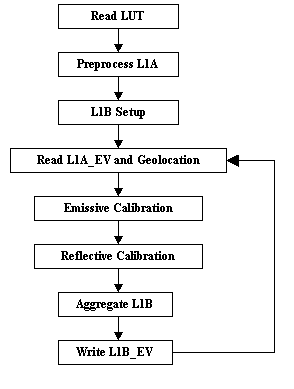 The Earth-view portion of a scan from one side of the MODIS double-sided scan mirror sweeps out an area 10 pixels along- track by 1354 pixels (or frames) cross-track. At nadir, these pixels are 1X1 kilometer. A pixel advance (1 km) cross-track is a frame. A frame includes 10 pixels (along-track) from each of the 36 bands. Each pixel of the two 250 meter bands has 16 sub-frames (digital samples) and each pixel of the five 500 meter bands has 4 sub-frames. In addition, Bands 13 and 14 output both high- and low-gain values. Each frame therefore consists of 830 digital numbers (DNs). Each value is indexed by band, detector, sub-frame and mirror-side (BDSM) and each is calibrated independently.

The L1B software is divided into two major modules. One applies the radiometric calibration and develops uncertainty indices for the 20 Reflective Solar Bands (RSBs) (Bands 1-19 and 26) and the second does the same for the 16 Thermal Emissive Bands (TEBs) (Bands 20-25 and 27-36). The radiometric calibration and uncertainty procedures are described in the following sections.

At any given time, there are two current versions of the L1B software and the numerous LUTs in order to accommodate minor differences in the Terra and Aqua sensors. Changes in both sets of software and updates of the LUTs are carefully tracked and archived so as to enable data reprocessing.

For each pixel, the Uncertainty Index (UI), with a range of 0-15, is computed online using the following:

UI utilizes the first four bits of an 8-bit unsigned integer, which yields a range of 0-15.

The TEB radiance values, LEV (W/m2/µm/sr), are scaled to an integer range of 0-32767 over the LUT-supplied dynamic range of Lmin to Lmax using:

The LUT-fuished values of Lmin and Lmax are indexed by band only.

The RSB reflectance factors are scaled in a similar manner.